Drug use has been steadily on the rise over the past decade, and each year, there are more drug arrests. Even though great strides are being made to treat drug use like the public health issue that it is, Texas still sees high numbers of criminal cases involving drug possession, intent to supply and trafficking.

Texas is harsh when it comes to punishing drug crimes and courts across the state have a reputation for tough sentencing and less leniency than in other crime areas. As an American citizen however, you have the full right to fight allegations of drug crimes and you have every right to employ a strong defense lawyer who will ensure you are treated correctly and your rights are maintained.

We will fight to have your charges dropped as a priority and where that is not possible, we will fight for an outcome that is favorable, with the lowest possible punishment and sentencing.

Getting in touch with a skilled criminal defense lawyer may be the best decision you ever make so give us a call today at 832-843-1691.

Which Drug Crimes Do We Defend Against in Katy, TX

Which Drugs Are Illegal In Katy, TX?

While the more well known controlled substances such as cocaine and heroin are common knowledge, many people do not have a full understanding of all of the substances that can lead to a crime.

An experienced criminal defense lawyer will defend clients who are being charged with crimes involving both illegal drugs and legal drugs. There are a range of laws that cover prescription drugs that many people are unaware of and misuse of a prescription drug can lead to a drug crime arrest.

In Texas, the following are classed as controlled substances with the potential for addiction, misuse and harm.

What Does a Katy Drug Crimes Lawyer Do?

Lawyers that offer criminal defense legal services against drug crime charges are responsible for defending accusations and charges of drug crime. Drug crimes relating to controlled substances can include possession, trafficking, intent to supply, and intent to manufacture.

A skilled criminal defense lawyer will attempt to find a resolution to any criminal charges. This may be the dropping of the charges or the seeking of the most favorable outcome for a client. Our attorneys will always work to protect the future of our clients. We know that drug charges can lead to serious repercussions in a person’s life, and we will do everything we possibly can to obtain an outcome that avoids this.

Whether you are a student being charged with a drug offense or you work in a profession that punishes drug crimes with disciplinary action at work, we will fight to safeguard your career and future.

If you are being charged with more serious crimes like trafficking or intent to supply, we will fight to have your charges dropped or, failing that, will fight tooth and nail to keep you out of prison.

There is a range of investigative strategies that we may employ to safeguard your future. We might apply to have evidence or documents suppressed, or we might look to investigate the law enforcement and the means through which they gained the evidence to arrest you.

In the event of a guilty plea, our lawyers will support you throughout, offering guidance and legal counsel.

When it comes to drug crimes involving selling, possession, manufacturing, distribution, and conspiracy of illegal drugs, there are multiple defenses that may be available to you.

Here are some of the most common defenses:

The police are not perfect, and while they do their hardest to protect us, misconduct and negligence are rife throughout the country. Police are often under pressure to provide results, and this may lead to them failing to adhere to the right channels and pathways.

If law enforcement has committed misconduct, such as coercing a fake confession, falsifying evidence, or using intimidation tactics, this can be classed as an abuse of power. We will put your case to the court and attempt to have any evidence obtained through this abuse of power dismissed.

One of the most common forms of police misconduct is an illegal search and seizure. Any evidence used against an individual in a drug crime trial must have been obtained legally and through the right channels.

Law enforcement cannot search a home without a valid warrant, and they cannot search a vehicle unless there is clear probable cause. Even if they have a warrant, they must follow all of the proper requirements and procedures while they carry out the search.

If they have obtained evidence through means that are not legal, such as searching without probable cause or without a warrant, or they have not followed correct procedures, we will seek the dismissal of that evidence.

What Are The Felony Drug Crimes In Texas?

Texas is strict on drug crimes, and for that reason, many of the drug crimes come with felony convictions. Many minor offenses that are usually classed as misdemeanors can be upgraded with very little cause to felony crimes too. Even for something as minor as the possession of drug paraphernalia, you may be looking at upgraded charges.

If you are facing any of the charges listed below, you need to get in touch with a criminal defense law office serving Katy, TX as you may be facing felony charges.

Drug trafficking is a serious offense and includes the delivery of a controlled substance from one person to another, possession, manufacturing and knowingly delivering. There did not have to have been a sale to be charged with drug trafficking.

Drug Paraphernalia Delivery To A Minor

Drug paraphernalia includes a range of objects but is defined as an object that is intended to contain, grow, plant harvest, cultivate, store, compound, manufacture, produce, convert, test, process, analyze or conceal a controlled substance.

Drug possession charges are when a person knowingly possesses a controlled substance without a prescription for that substance. Whether or not you are charged with a felony charge for possession will depend upon the amount and the category the substance is in.

There are numerous reasons that a person might commit prescription drug fraud. If the drug is a scheduled controlled substance and a person knowingly obtains, possesses, or attempts to possess the substance, they can be charged. You can also be charged for seeking an increased amount of a prescription drug that has been prescribed.

You can successfully be charged for this crime without any sale taking place.

In order to be charged with drug manufacturing, another felony charge, you must be found knowingly manufacturing a controlled substance. This charge can be brought against an individual caught producing, converting, preparing, propagating, labeling, relabeling or packaging a substance.

Depending upon which charge you are facing, the amount of substance found, and the category of the controlled substance, your charges can result in a range of punishments. Convictions for a first-degree felony will come with worse consequences than a state first-degree felony, and which charge you face will depend upon the circumstances of your arrest and the evidence against you.

You can be charged with a felony for every controlled substance in Texas if the quantity is large enough. Listed below are some of the classifications for each felony drug offense and some of the penalties that may result from a charge:

Is It Still Illegal To Possess Marijuana in Texas?

Yes, even though states that neighbor Texas have voted to legalize marijuana to some degree, in Texas, it is still illegal. This includes medical marijuana.

Will I Get Fired for a Drug Conviction?

While there is no guarantee a drug conviction will lead to job termination, it could happen. Many employers have a policy that allows them to immediately terminate an employee if they are convicted of drug crimes. What’s worse, you may find it harder to seek further employment.

Many employers will conduct full background checks on their new employees and a conviction will often mean they will not hire you.

Can I Be Denied Housing Because of a Drug Conviction?

Yes, although it is not legally required, many housing corporations and landlords will conduct background checks and may refuse you housing if they see a drug conviction on your record.

The consequences of being charged with a drug crime are severe in Texas. This is why we highly recommend seeking the help of a skilled and experienced Katy drug crimes lawyer.

Contact us at 832-843-1691 to begin the process of securing a strong criminal defense case for your drug charge. 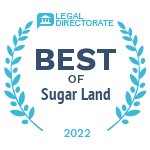 Taking The Weight
Off Your Shoulders

Disclaimer: The use of the internet or this form for communication with the firm or any individual member of the firm does not establish an attorney-client relationship. Confidential or time-sensitive information should not be sent through the contact form.